Tomas Maier said in his show notes he was inspired by dancers off-duty, their “beautiful posture” and “dancer’s walk.” 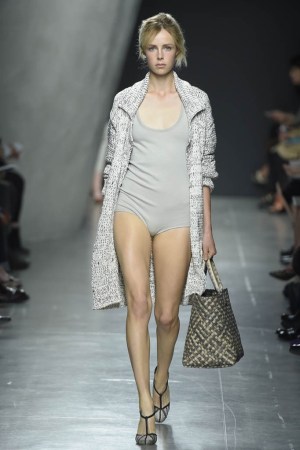 “The body in movement.” If such an inspiration sounds wide open for interpretation, it took Bottega Veneta’s Tomas Maier in two distinct directions for spring. Though it felt a bit disjointed in this era of the one-note show, Maier impressed from both sides.

There was, in fact, an overarching motif; Maier said in his show notes he was inspired by dancers off-duty, their “beautiful posture” and “dancer’s walk.” Inherent therein was a languid grace, which he captured well. He opened with sportif, integrating dance and more general athletic references — a bodysuit-leotard under a chunky cardigan; cropped ballet sweater over briefs; chicly bulked-up sweats — with practical items derived from what was once known as “designer sportswear.” These looks were reminiscent of the days when the major names of that genre populated their shows with the kind of real clothes they expected to sell — and their customers to wear. Which is not to be confused with retro — this wasn’t. Rather, it was reality-based casual luxury that we seldom see portrayed so directly on the runway these days. It looked elegant and smart.

Apparently, Maier’s dancer reveals her off-duty artistic side when she puts on a dress. Whereas the sportswear was unfettered in its appeal, fluid dresses in denim, two-tone pastel shirtings and rumpled ginghams were embellished with seemingly random collages of paillettes, mesh and lace. While one or two were overwrought to a self-conscious degree, their artsy flourishes too much at odds with the ease of the dress, most were perfectly en pointe.