“I wanted to keep the rigor in the lines and silhouette,” Frida Giannini said backstage, behind her a mood board featuring multiple photos of Ali MacGraw. 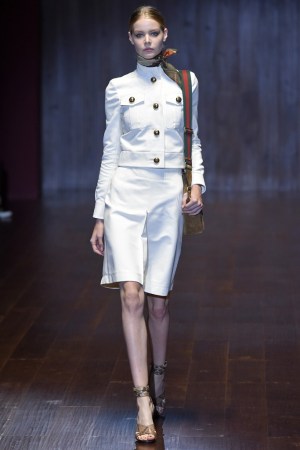 Particularly within a large luxury group, every brand has its role. Gucci is Kering’s commercial anchor; its function and that of its designer, Frida Giannini, is to turn out smart, accessible fashion, “mass luxury,” as it was called back in the day.

That’s not an easy mandate. Nor is it a simple concept to refresh season after season on the runway. The spring collection Giannini showed on Wednesday afternoon offered plenty of appealing clothes, but they came veiled in tried-and-true familiarity. They picked up directly from the precision cuts she favored for fall while harkening back with utter clarity to the Seventies, a reference era with which Giannini and her customer are well-versed. “I wanted to keep the rigor in the lines and silhouette,” Giannini said backstage, behind her a mood board featuring multiple photos of Ali MacGraw.

The Gucci customer will find plenty to wear in the clean, neat lines of Giannini’s tailoring and the crisp ease of shirtdresses. The former featured military touches, either no-nonsense, as in a white high-collared suit jacket with big brass buttons that opened the show, or more flamboyant passementeried versions. The smart shirtdresses in leather and cotton broiderie anglaise will delight latter-day Ali types, while deep-V shifts looked more overtly provocative.

Giannini showed a softer side, as well, in patchwork silk-print dresses, some under collage furs that fell somewhere between artisanal and messy. She also went big with denim — literally, in wide-cut, low-slung jeans. These were interesting and, by house standards, daring of proportion. Whether the always sexy Gucci Girl is ready to loosen up a bit, time will tell, but it was good to see Giannini nudged out of her comfort zone.