The latest installment in the Jil Sander saga stars Rodolfo Paglialunga as the new leading man charged with gunning the rudderless label toward relevancy. 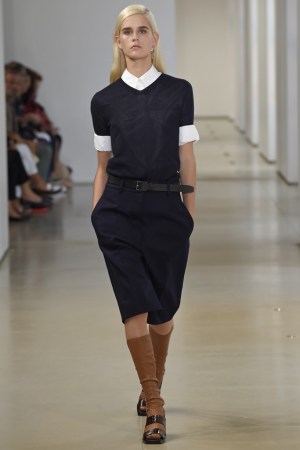 Oh the drama of a fashion house founded on the principles of grown-up practicality. The latest installment in the Jil Sander saga stars Rodolfo Paglialunga as the new leading man charged with gunning the rudderless label toward relevancy.

If this were a scripted drama, then Paglialunga would instantaneously return the house to the fashion prominence it experienced under Sander herself and, later, Raf Simons. In reality, Paglialunga, not to be underestimated, imparted a definitive position on the company precepts of astute minimalism, skewing more toward the Sander/Joe McKenna days of mid-Nineties lore than the romantic digression with which Simons ended his tenure.

The lineup was a uniform of tailored androgyny in vibrant, classic colors of maroon, cobalt, cornflower and navy blue, and ivory. Shirts that had been given a light starching were worn under classic turtlenecks and sweater-vests. Stiff double-gabardine wrap skirts and long shorts rode ultralow on the hips and were belted for emphasis. A neat bar pattern nimbly broke up the mostly solid lineup, inspired by Annemarie Schwarzenbach, a 1930s Swiss photographer and writer known for her gender-neutral style.

It wasn’t perfect. Some awkward proportions and a few ill fits needed to be finessed to achieve the avant status that Paglialunga inferred. Yet he showed real potential in a confident debut. Now the question is, Does anyone have the patience to see it play out?