Backstage before the show, Massimo Giorgetti cited Jonathan Franzen’s novel “Freedom,” which he recently read in Italian, as the inspiration for his collection. 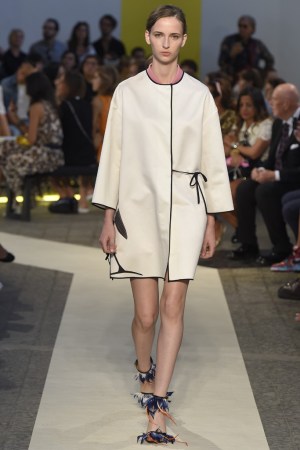 Freedom, and its sartorial expression, has been top-of-mind for Milan designers this season, including MSGM’s Massimo Giorgetti. He approached the idea via a literary tool, Jonathan Franzen’s novel “Freedom.” Backstage before the show, he cited the book, which he recently read in Italian, as the inspiration for his collection — particularly Franzen’s nods to birds and music.

The youthful silhouettes and playful patterns echoed the theme nicely. Giorgetti had whimsical bird motifs on many of the looks, including the back of a collarless coat and sequined around the torso of a sporty shift, or turned into an allover pattern, such as on an embroidered black tulle shirt shown over a navy lace T-shirt dress.

The sophisticated foliage-and-bird slipdresses with tulle overlays signaled the contemporary designer’s confidence and possible readiness to move to the next level — which made the presence of LVMH executives at the show worth noting. They could be interested in investing in this buzzy young brand. Or maybe the corporate honchos are scouting the designer’s penchant for prints for Pucci. For the time being, Giorgetti remains a free agent.