For spring, his fourth effort, he was inspired by Brazil in the Sixties as well as Brazilian architects Oscar Niemeyer and Roberto Burle Marx. 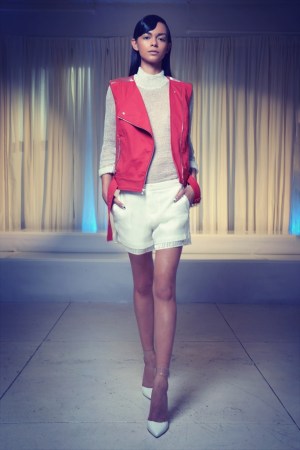 Israel-born, New York-based Daniel Silverstain has been quietly designing for a few seasons since graduating from the Fashion Institute of Technology — though he managed to catch the attention of Lady Gaga, who wore a look from his fall collection on her birthday in March.

For spring, his fourth effort, he was inspired by Brazil in the Sixties as well as Brazilian architects Oscar Niemeyer and Roberto Burle Marx. This was reflected in some of his arty textile techniques, like embossed Neoprene, beaded mesh detailing and jacquard separates with a sheer overlay that lent a 3-D effect.

His motorcycle jackets, done in metallic and pastel painted leather, as well as a pair of athletic-inspired mesh trousers, are sure to be a hit with the downtown set.