Mary-Kate Olsen and Ashley Olsen showed off their casual-cool proclivities with sporty elegance. 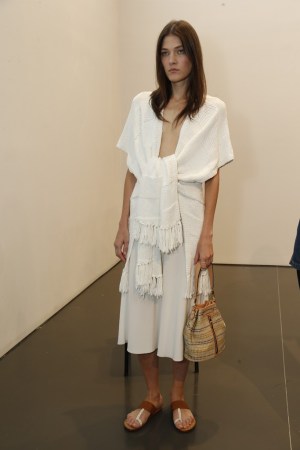 For the presentation at Affirmation Arts, Mary-Kate Olsen and Ashley Olsen propped six surfboards against a white wall, signaling the direction they were taking with their spring Elizabeth and James collection. “A beachier, more California vibe” is how Ashley put it, though these clothes didn’t overtly play into surf culture. Instead, they showed off their casual-cool proclivities with sporty elegance, from the boyishly chic cotton windowpane shirt shown with a palm-print midiskirt, to the white knit serape top with a crepe skirt. The latter especially captured an ease and carefree attitude that revealed the duo’s version of California dreaming.