A major showman, Jacobs staged for spring a performance-art piece worked around a stellar collection based on a single, mundane concept: uniforms. 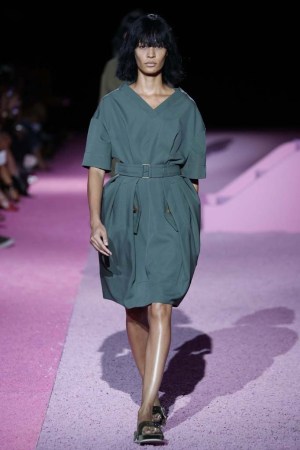 The house was bubble-gum pink. The narration heard through Dr. Dre headphones was based on a 1976 short film, “The Girl Chewing Gum.” Coincidence? Most likely. In describing the gigantic three-wing house he commissioned as the centerpiece of his spring collection, Marc Jacobs likened the facade’s hue to Pepto-Bismol.

The two relate in that both were major elements in Jacobs’ wonderfully weird show on Thursday. A major showman, he staged for spring a performance-art piece worked around a stellar collection based on a single, mundane concept: uniforms. It started with the colors — “They’re kind of invisible colors,” Jacobs said during a preview. “Then, I started thinking about uniforms and decoration and anonymity and the idea of uniforms and youth culture. Uniforms used to be a symbol of rebellion and protest. And now, it doesn’t mean anything. It’s just what you wear.”

Jacobs rejects the idea of reading deep thought into an outfit. But at the end of a long New York Fashion Week, it’s great to read some thoughts into the clothes parading by. In a welcome expression of fashion irony, he perverted the uniform’s anonymity into something flamboyant and memorable, even in that fade-away palette of olive, tan and blues. Flirty, hyper-sculpted minis. Long, shapeless schoolgirl dresses. Slouchy overalls. Cropped cargo pants. Waist-conscious jackets cut with militaristic precision. Giant sweats cut with room for two. Cargo pockets abounded, here, there and everywhere. As for other decoration, after intense research of institutions from the Girl Scouts to the Army, Jacobs represented the idea of badges and medals with huge resin cabochons, often set into guipure. The only exception to his no-sparkle approach: the shoes, blatant appropriations of Dr. Scholl’s, but in velvet with pavé crystal buckles.

Razor-focused as it was, those paying attention could see range — sexy dress here, I-don’t-want-a-guy dress there — and the insertions of what might be considered house codes. Case in point: The embellished sweats that continued from last spring’s tasselled Victorians and fall’s indiscreet Coca-Cola homage.

As for the pink house, Jacobs said it had nothing to do with anything in particular, except that it looked happy. And it brought the New York shows to a close on a delightfully high note.