Norma Kamali’s Sweats line was true to its name as she played with boyfriend proportions for a spring collection that was body-flattering and playful. 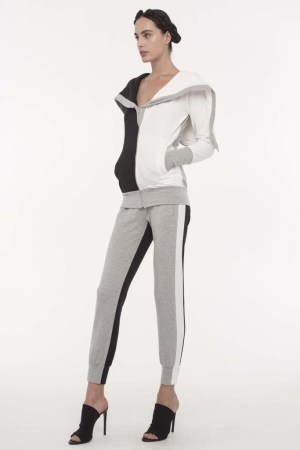 True to its name, everything in Norma Kamali’s Sweats line — including daytime looks, suitings, gymwear, outerwear and swim — had an activewear vibe. “It’s a wardrobe that works for modern women and should all cross over,” Kamali said.

She played with boyfriend proportions, but had the fit down to a science, so sweatshirts, hoodies, a dress, sweatpants and shorts all had body-flattering silhouettes. Kamali’s color palette — vivid shades of green, blue and orange, all with reflective bands — added a playful vibe. She also digitally printed painterly patterns onto suits, dresses, overalls, swimsuits and outerwear; a small collection of animal-print T-shirts — giraffes, elephants — were equally charming.

For evening, Kamali took the sweat suit to a whole new level, working with foiled terry for a laid-back approach to nighttime glamour.