Two American boys living the American Dream, Lazaro Hernandez and Jack McCollough looked to the homeland for their spring collection. 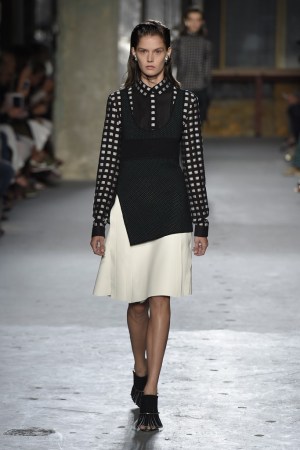 Two American boys living the American Dream, Lazaro Hernandez and Jack McCollough looked to the homeland for their spring collection. “Americana” was a word bandied about during a preview. So was “prep,” a term Hernandez tossed out and then immediately tried to call back. “Scratch that,” he said, a little surprised at his own invocation of so mundane a reference.

Scratch it, bury it, blur it, dissect it. It’s not the word, it’s what you do with it. The game plan was to take a host of classics such as the polo, button-down shirts, Windbreakers and braided belts, and subject them to what Hernandez called “our weird vision.” The outcome was mixed, but it pulsed with a quality that eludes many others: cool.

Hernandez and McCollough always strive to push boundaries and deliver the unexpected, achieving it here through proportion, fabrication, styling and color. Interesting, yes, but at times it lacked their usual momentum and allure. For example, a Windbreaker was rendered as a paper-weight leather shirt in rusty orange with a graphic white stripe across the chest, and worn tucked into a matching, perforated pleated skirt that fell to midcalf. The look tried to play feminine sophistication against edgy sport. It worked to neither’s advantage.

But then there were moments when the classics and the Proenza weirdness gelled beautifully. Argyle, the mother lode of American prep-ola, was never more modern and un-ironically chic than as abstract crocheted diamonds on a white leather shell, and a navy sweater with a delicate arrangement of floating diamonds connected with silk threads. The latter was part of the show’s hero group of tank dresses and skirts made of intricately woven silk that was pulled apart to create long, loose fringe skirts. Classic? Preppy? Not particularly. But lovely in their fluid, dark drama.