After an eight-year hiatus from fashion, Zaldy delivered a theatrical spring comeback collection. 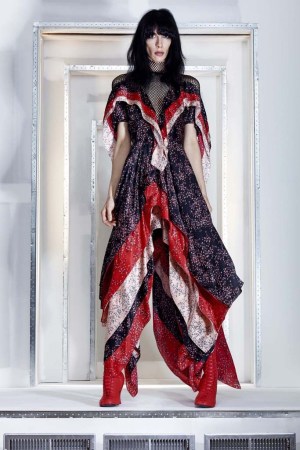 During an eight-year hiatus from fashion, Zaldy created costumes for Cirque du Soleil, Britney Spears, Lady Gaga and Michael Jackson. Such experience was evident in his spring comeback collection, which was quite theatrical, though for the most part, executed with an eye to commerce.

The designer was informed by air, earth and the “luxury mummy,” the latter an unexpected inspiration. He emphasized that it was “not literal but in the head-to-toe idea of the look.” Case in point: the double-faced silk-gauze ruffle circle dress — dramatic, but wearable. There were also hints of disco, as in several tulle scarf dresses that were layered, embroidered and ruffled. They were ready for the stage, but could also work on strong characters like model-musician Jamie Bochert, whom Zaldy chose for his look book.