Tailoring and movement. Cedric Charlier had both in a well-edited lineup for spring that showed the designer’s growing confidence to push his work. 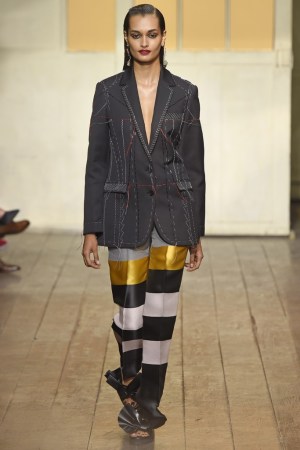 Tailoring and movement. Cédric Charlier had both in a well-edited lineup for spring that showed the designer’s growing confidence to push his work. Charlier set the blueprint from the start with bold stripes that ran horizontally. Used in pants and a shift dress, and paired with jackets and vests featuring exposed stitching and beads, these set the tone for the rest of the collection via more abstract interpretations of the look. It came softened, for example, with the stripe translated into dresses made from layered panels, as in the turquoise shirtdress with a green hem, and several other numbers that were striking in the way the mapping of materials created a graphic color-blocked effect.

Ease came by way of pleats. Charlier artfully pieced these together for dresses that could have been tricked-up, but weren’t. His prior experience at Lanvin may have had something to do with that. The effect was light and easy.