The designer explored the industrial theme through the Sixties lens and a subtle Japanese vibe in the details. 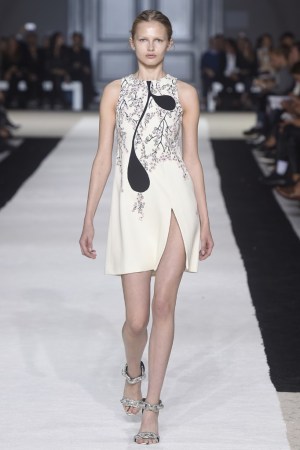 On his mood board, Giambattista Valli had photographs of 20th-century furniture and buildings alongside words such as “abstract,” “kaleidoscopic” and “hypnotic.” Backstage after the show, he cited an interest in industrial design, and referenced Metabolism, the Japanese movement that merged architectural designs with organic shapes.

To those who know Valli and his penchant for clothes aimed at pretty young (and more mature) things, this was an unexpected turn, but so was the spring collection.

The designer explored the theme through the Sixties lens and a subtle Japanese vibe in the details. The industrial edge was in the precise lines of the silhouettes: clean shifts as well as tunics paired with slim pants that were only slightly flared — no room for ruffle and flounce here.

Surface work added an organic dimension. The patterns were eclectic, busy and perhaps even a touch psychedelic (which explains the hypnotic part). The most memorable motif looked like a musical note; a vine, meanwhile, recalled the patterns of an Asian silk screen.

There was something arts-and-craftsy about these looks, a notion extending to several frayed numbers that appeared shredded — certainly playful, but not for everyone.

The calmer pieces were standouts, especially the simple white tunic shown over pants featuring a bold stripe on one leg. The look was industrial by Valli standards, and also chic.