For his final Hermès collection, Christophe Lemaire confidently homed in on all the elements that have defined his tenure at the house. 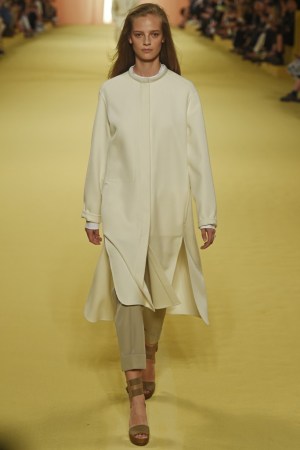 For his final Hermès collection, Christophe Lemaire, who is departing after four years to focus on his own label, confidently homed in on all the elements that have defined his tenure at the house — as in calmly sophisticated, luxurious clothes.

After four weeks of collections with abundant Seventies riffs, this lineup accomplished a refreshing antidote that almost felt like a palate cleanser at the end of the spring season.

Staged at the l’Orangerie Férou in Paris’ beautiful Luxembourg Gardens, the runway was a bed of desert sand, its backdrop a large Hermès orange curtain. Just before the show started, men in white coveralls brushed the floor to create a perfectly smooth surface. Such meticulous attention to detail extended to the looks, from the way Lemaire combined different exotic skins for tailored jackets to a refined lace-and-eyelet pattern on a charming white dress.

Reflecting the set’s theme, there was a hint of Berber chic in the collection. Several colors were sunburnt, as if ripened in the desert; elegant jackets, coats and dresses featured a sash detail that was stylishly tossed over one shoulder to add a subtle tribal touch.

Lemaire’s last look was the ultimate homage to the brand: a breezy summer halter dress in the color of the house’s iconic box.

Nadège Vanhee-Cybulski, an alum of Céline and The Row, is taking over the women’s ready-to-wear from Lemaire. See you in March.