Olga Sorokina cited several directions for spring in her show notes, which she pulled together with a casual-yet-sophisticated approach. 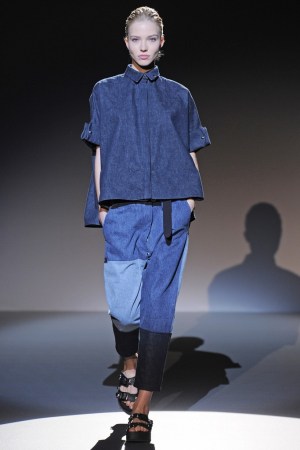 Olga Sorokina cited several directions for spring — denim, military, graphic black and white among them — in her show notes, which she pulled together with a casual-yet-sophisticated approach.

Expanding on resort’s street influence, there were soft parachute coats and chic, short shirtdresses that were just slightly oversize. The transparent, long versions of the silhouette, unbuttoned below the waist over leather micro-shorts, provided a daring alternative.

Amping up the surface play, Sorokina also added some glitter in a Lurex rib-knit sweater with utilitarian pockets and in metal bead embellishment placed like polka dots on several pieces, including two white cocktail dresses.

Denim was the show’s strongest group, especially the navy top that looked like a racerback and was teamed with tie-dye jeans shorts. They may be casual, but they had a nice polish.