The juxtaposition — or was it a fusion? — of techno cool with the warm, nostalgic familiar presaged Nicolas Ghesquière’s second collection for Vuitton. 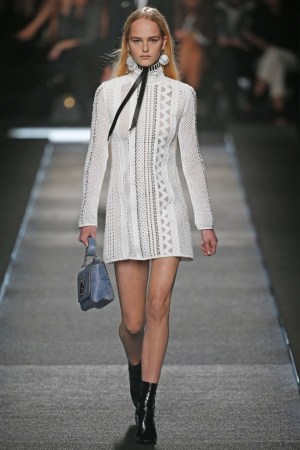 “A beginning is a very delicate time,” delivered a Greek chorus of giant, attractive young faces that were projected onto glass screens at the start of the Louis Vuitton show. Their scale and sci-fi intonation continued the otherworldly aura of the Frank Gehry-designed Fondation Louis Vuitton, which has its official opening later this month. The vast, multiangled, multiwinged spaceship of a building looks inviting and imposing.

Arriving guests walked past Olafur Eliasson’s installation of huge, rectangular yellow-glass panels and mirrors — stand in just the right place and you could see 43 versions of yourself — into a lower-level space set up with a maze of angular, black seating, the path illuminated by a precise stream of stark, diagonal spotlights. After the robotic voices of the futuristic talking heads beckoned the audience “to sit in a place that doesn’t exist for now,” the music started: “Hello, darkness, my old friend.”

That juxtaposition — or was it a fusion? — of techno cool with the warm, nostalgic familiar presaged Nicolas Ghesquière’s second collection for Vuitton. Backstage before the event, the designer said he considered it an honor to show in the space but that he didn’t create the collection specifically to work within it. “Of course, I was projecting my work into the environment,” he said. “But it was not a direct reference to the space. It’s only been six months. I’m building that wardrobe, and I’m defining what is Louis Vuitton today, thinking about different moments for the multiple women I’m projecting for Louis Vuitton. But again, it’s, like, March. Not a big statement.”

He undersold. This collection was a huge step from fall’s pleasant transitional effort. That said, Ghesquière did, indeed, continue with the wardrobe-building template he established then. Here, he did it with greater range and flamboyance, even a dose of humor. He opened with beautiful, intricately wrought multitextured crochet and lace dresses, some played against slick geometrically patterned eel. These went two ways: clean and precise or fluid and girly. Yet Ghesquière has always been a pants guy. His most elegant looks were a pair of jackets over shaggy fur liners and shorts. Though ergonomic knee-pad detailing harkened back to Ghesquière’s past life in futuristic sci-fi fashion, he preferred to linger elsewhere. “Sure, there’s a hint of the Seventies,” he said. And not always the chicest hint — crushed velvet jeans, anyone?

Bags — what do you think? — were shown in numerous shapes and treatments, including a feisty red-on-black update of the monogram.