For the first time since 2006, the designer gave up on the runway and opted instead for a simple showroom presentation. 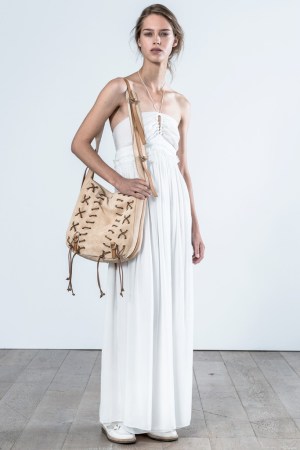 Following a period of creative soul-searching, Vanessa Bruno has hit the reboot button on her namesake label. For the first time since 2006, the designer gave up on the runway and opted instead for a simple showroom presentation.

The change of scene did her well. Bruno delivered a delightfully quiet spring collection, stripped down to basics, with easy, wearable and modern pieces. Although utilitywear took center stage, she rendered it with soft, feminine touches, as seen on belted workmen’s jackets in patchwork or washed-out denim and daintily tie-dyed men’s shirts.

Also, in an effort to reposition her 22-year-old brand for the future, Bruno has tapped Thierry Le Guénic as chief executive officer. It is understood that Le Guénic, who joined the company from Parisian master tailor Smalto in September, will be in charge of the brand’s international development.