Hanae Mori, one of Japan's most storied fashion houses, tapped Yu Amatsu to target a "new generation of women." 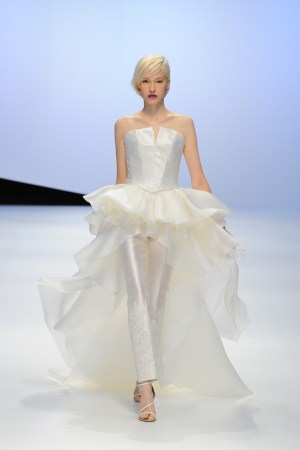 Hanae Mori, in introducing a new subbrand, tapped Yu Amatsu to target a “new generation of women.” For his debut, Amatsu opened with a white group that ranged from fresh day looks to evening pieces with an unmistakable bridal vibe, including a bustier top with a peplum and long train worn over embroidered cigarette pants.

Amatsu, already a Tokyo Fashion Week regular with his A Degree Fahrenheit label, was most effective with a range of butterfly prints, shown in a lush blue-and-green version and in a more striking yellow-and-orange combo. Drawing on one of Mori’s signature motifs, he superimposed the insect’s wings on feminine shift dresses as well as shorts paired with a short-sleeve jacket in a mesh fabric.

Mori said she was pleased, noting she had been looking for a young designer who had experience in New York — Amatsu worked as a pattern maker for Marc Jacobs and Jen Kao before setting up shop for himself. “He’s someone who makes very simple, New York-style, wearable clothes,” the retired couturier said. “And he also likes butterflies.”