For spring, Ashley Williams showed a fun collection that offered a more grown-up take on her cheeky aesthetic. 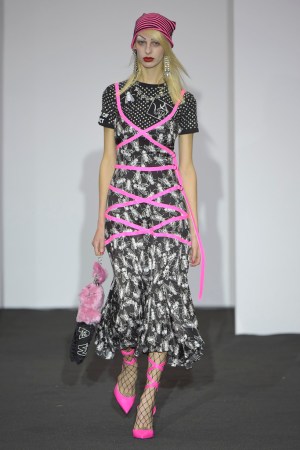 Ashley Williams’ kooky, bad-girl muse took a Gothic, yet glam turn for spring with creepy insect prints, black chiffon and studded leather. That said, some of the silhouettes were surprisingly ladylike, as in a bias-cut silk sleeveless dress with a black and white print of giant flies. It had a fluttering, asymmetric skirt in a contrasting fishnet pattern, which echoed the models’ punky fishnet tights.

A one-shouldered black silk gown, meanwhile, was covered in a panel of crystal studs, which ran from the hip to the hem. Williams also mixed up her looks with a few street-influenced pieces, such as a black leather jacket with a hot-pink chevron stripe, worn over a fluttery-hemmed dress.

This was a fun collection that offered a more grown-up take on Williams’ cheeky aesthetic.