KTZ creative director Marjan Pejoski sent bottle-cap minidresses and trenchcoats constructed from the paper tags on the back of Levi's jeans down his spring runway. 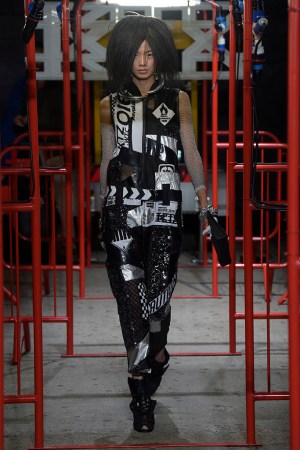 “Everything is possible,” proclaimed the analogue screens above the industrial-style runway for KTZ’s spring collection, which drew inspiration from punk-rock singer Siouxsie Sioux, the 1982 film “Blade Runner” and Ethiopia’s Mursi tribe, according to creative director Marjan Pejoski. These diverse references played out in metallic-patchwork minidresses, some jangling with metal embellishment, and others constructed entirely from discarded bottle tops.

There were also structured pieces, such as an innovative trenchcoat made from the paper tab fabric found on the back of a pair of Levi’s, and plasticized paint-splattered clothing resembling Jackson Pollock canvases. It was off-the-wall, but well-executed nonetheless.