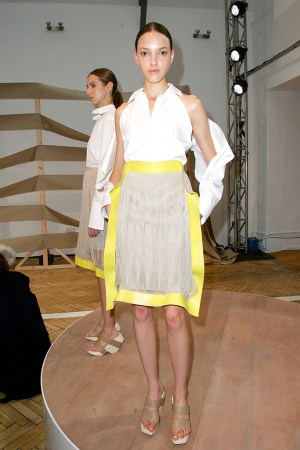 Designers Levi Palmer and Matthew Harding said in the show notes for their Palmer Harding spring collection that they were inspired by the work of American contemporary artist Nathan Peter, who often uses shredded linen as a canvas.

The best looks were those that interpreted the designers’ starting point with a light touch. They included a white shirt — a signature of the label — done in a translucent textured silk, which had open sides so it draped over the body like a cape. Another appealing look was a blue-and-white pinstriped shirt, cut away to reveal the shoulders and the tops of the arms and worn with a skirt in shredded silk.

More tricky were the tabardlike dresses made from a panel of shredded linen with painted edges — each looked as if the model was wearing one of Peter’s actual works.