Tom Ford is rethinking the traditional fashion show concept with a little help from Lady Gaga and Soul Train. 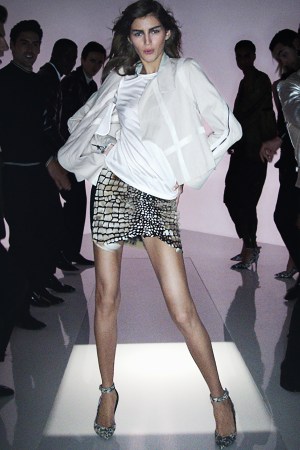 Is the sea change underway? First Riccardo Tisci and the Rag & Bone guys introduced open-to-the-public elements to their shows, and now, Tom Ford has gone further, creating a slick video for the purpose of telegraphing his spring message to the world. It went live at 1 p.m. EDT on Friday, Oct. 2.

Ford’s got brass ones, always has. He’s been experimenting with ways to address fashion’s changing realities for some time. In 2010, he resisted the still-nascent social media, staging an intimate, house photography-only runway show for which he gathered a cadre of celebrity friends as models. The event slayed its audience, whose members felt exclusive and pampered. But when he tried to keep up with the no-coverage/no-photos policy through subsequent seasons — vivisection.

Ford changed gears quickly, staging small shows in London and last season, an L.A. extravaganza at the front end of Oscar weekend. His spring video, inspired by the Seventies TV show “Soul Train” and directed by Nick Knight, takes him further outside the box. Ford’s not the first designer to go the fashion-show video route. But he’s the first with supernova status, and the first to feature Lady Gaga on both runway and soundtrack. He’s unique, too, in his reason for being otherwise engaged this season, as he’s now directing “Nocturnal Animals,” his second feature film.

In an e-mail he signed that went out with the video, Ford articulated a fact: “Having a runway show has become so much about the creation of imagery for online and social media.” He thus decided to “think about how to present a collection in a cinematic way that was designed from its inception to be presented online.”

Designed from its inception to be presented online. It’s on everyone’s mind — designing for “likes” and to look good when Instagrammed. Ford’s video is fabulous, a high-production funfest of dancing and music. Rather than pure fashion show, it’s a fashion show-music video hybrid. As such, it dispenses with some fashion show standards: 20 years of zombie-walk models — bye-bye; these girls dance furiously down the runway like Pat Cleveland used to model. It’s fashion entertainment conceived, produced and packaged to be just that, without apology.

The clothes are real in the Ford sphere of flashy-sexy; his women believe that assets not flaunted are assets wasted. That translates here as lots of snake, shine and short, short, short, the better to gyrate down the runway. The prevailing silhouette pairs a relaxed top with a leggy skirt, though pants, both sleek and utilitarian, get some stage (er, runway) time. Athletic references reflect Ford’s relatively recent conversion to a sportswear approach to daywear. For evening: bodycon lines and high color, high shine, high heat.

Is viewing a collection on video and in video stills the same as seeing it in person? No. But today’s fashion shows are intended to radiate brand image with seasonal nuance instantly to a global audience. Ford’s video will get a gazillion views, almost all accompanied by a coveted “like.” And if a small percentage of a gazillion translates into retail visits, it’s a lot.