Antonio Marras created an assemblage of multilayered references for spring to relay his highly personal and romantic point of view. 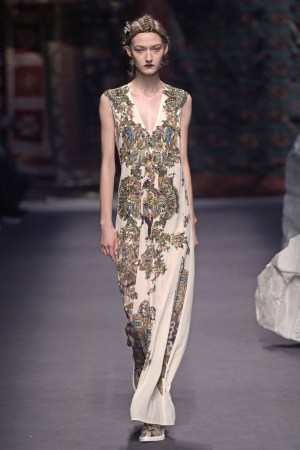 Antonio Marras is not the type of designer to explain his collections with a succinct sound bite or reduce his work to the purely visual. They are not just clothes. Each season, an emotion-bound story drives Marras to create an assemblage of multilayered references — whatever has caught his eye or his heart over time. That is the definition of collage, an art form for which Marras has a gift. See his mood boards, invitations and backstage area for gorgeous examples that put Pinterest boards to shame.

Marras’s spring collection was another fantastically creative outlet for this highly personal, romantic point of view. He keyed in on Sergei Iosifovic Parajanov, an Armenian director and artist, whose work — including many collages — Marras found in a 2007 exhibition in Paris called Le Magnifique. “I found many affinities between his incredible, genius work and my own work,” said Marras in a pre-show interview.

Collaging a collage artist has a multiplier effect on the realm of details available for appropriation, and Marras explained them all in great detail in his show notes: Parajanov’s film “The Colour of Pomegranates”; his interest in Georgian folklore, and the region’s many ethnicities. One line in particular struck a chord: “We need excess, eccentricity against the cliché, banality, uniformity.”

The clothes delivered on this thought, beginning with linear, simple shapes in ornate prints — a long, straight V-neck dress, a patterned jacket over boy shorts — and ranging to ornate shapes with eclectic ornamentation. Humble silhouettes and drab colors contrasted with the rich and regal. For example, a cropped gold jacket with elaborately decorated shoulders was worn over a plain clay-colored cropped utility jumpsuit with a vaguely Forties double-breasted blazer detail. Some of the most beautiful dresses, one with an embroidered collar and gold polka-dot details, another in a bold rose print, were suspended from simple spaghetti-strap shoulder ties and layered over plain ribbed undershirt style tank tops.

The range of lavish fabrications, embellishments and constructions was too vast to break down. The brass and gold palette and exotic, fairytale trims conjured a rich nostalgia and the show ended with a finale of purist white, crafty romance. Yet it was tempered by real silhouettes: tailoring, shirting, easy overcoats and tank dresses. Marras is a dreamer but he knows reality. Earlier this year he talked of taking on a financial partner to help him distribute his dreams to more customers.