Tommaso Aquilano and Roberto Rimondi’s spring collection was anchored in minimalism with a touch of the Warholian. 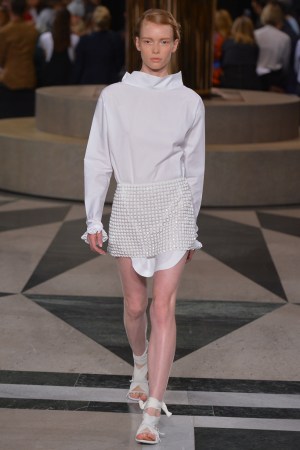 Minimalism and Andy Warhol. How many designers per season call on those two for reference? They are far from original, and yet when handled properly they can yield highly creative results. On the other hand, they can offer designers an easy way out.

For the most part, Tommaso Aquilano and Roberto Rimondi’s spring collection, anchored in minimalism with a touch of the Warholian, featured little in terms of real design, as they preferred to focus on “purity of form,” according to show notes.

The simplicity was expressed in classic, stark white men’s shirts, cut long and tweaked with details such as a reverse collar, sequined sleeves or drawstrings that created a ruched effect. The shirts alone were nice, crisp and absolutely wearable with a bit of a novelty. Still, they weren’t novel or conceptual enough to hang an entire collection on, nor were the layered styling effects: white sequined miniskirts so short the shirttails stuck out, sheer tanks and slips with a ruffled hem. Similar ideas appeared in slick black and pixelated-floral prints meant to evoke The Factory.

What was new were the Aquilano.Rimondi bags presented on the runway for the first time: BAG-A.R., as they call it, featured cross-body styles in cream, bright blue, black and white.