Design director Pablo Coppola presented a spring sportswear collection that was pared down in attitude and ultrarich in fabrication. 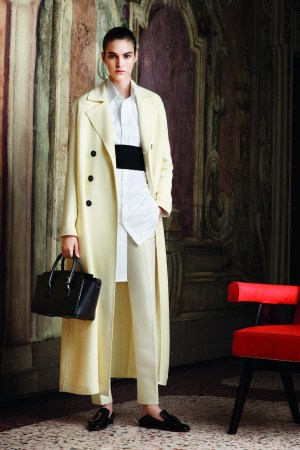 How to make ready-to-wear even mildly relevant at a house historically known for accessories? It helps to have a grip on the clothes’ piece of the company pie. Bally’s design director, Pablo Coppola, was direct on this subject: “The clothes are a really nice vehicle to explain and give a mood to the bags,” he said during the spring presentation, where the rtw was presented on racks interspersed with the shoes, bags and jewelry. “I need them for the ad campaign, for the look book. They’re like a great excuse.”

Coppola used it to make beautiful sportswear that was pared down in attitude and ultrarich in fabrication. Quiet luxury is the term the industry has subscribed to. Coppola’s idea was the bourgeois of the future, where it would take on a Nineties and 2010s feeling rather than the Seventies aesthetic with which it’s typically associated.

Highlights included an ivory silk tuxedo jacket that fastened with a streamlined hardware hook rather than a button; a double-faced cashmere vest with two long, folded panels in the front that looked elegantly relaxed over wide-leg drawstring pants and one of the most important shoes of the season: a loafer with a big buckled strap over the toe and aback that looked as if it had been broken down from constant sliding on. It was broken in for you.

To Coppola’s point, the clothes imparted an air of tony, tasteful yet modern unfussiness on the bags, which included quilted rectangular fold-overs and square top-handled styles that were bourgeois in the classic sense.