Fausto Puglisi drew from dual wells of inspiration — one ancient, one modern — for his vivid, embellished spring collection. 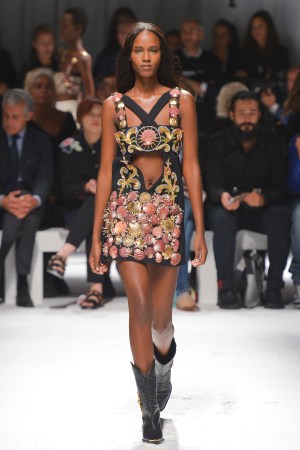 Which designer best transposed the gorgeous draping of ancient Greece and Rome into modern times? Roy Halston, according to Fausto Puglisi, whose mood board spanned millennia-old statuary at the Vatican and modern cultural icons: Hollywood divas, rodeo queens and cowboys.

His spring collection flicked between those dual wells of inspiration: here a minidress in skimpy swags of black chiffon; there a hefty biker jacket weighed down with metallic gewgaws. Most exits were of the hot-blooded and flashy variety, with many veering toward the garish. The draped jersey shone in vivid jewel tones, and every fabric capable of supporting metal seashells got dozens of them.

Yet with this lineup Puglisi softened some of his hard edges, introducing lighter and more fluid fabrics as well as dead-simple shapes, such as the striking ivory column with a partial cape that closed the show. Backstage, he also noted that his gleaming green satin jacket would be available at the showroom in plain cotton, and that altering some of the extreme lengths was not a problem. Hard sell, or soft sell?