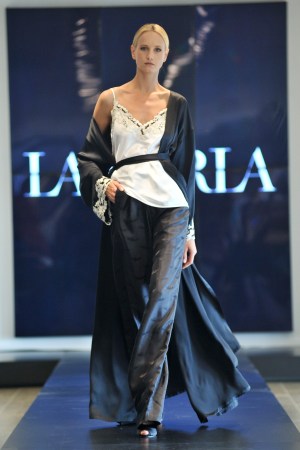 It’s been a year of firsts for La Perla. In January, the label launched its made-to-measure Atelier Collection at Paris Couture Week, and this spring its new men’s collection hit stores, backed by an advertising campaign that broke from tradition by featuring a male model for the first time.

So it might not come as a surprise that men’s wear influences abounded in the Italian fine lingerie brand’s spring collection. Some of the looks simply mirrored what women already do in private — borrow their partner’s pajama pants and robe to wear with a lacy black bra, for instance.

A semi-sheer navy bodysuit worn with silk boxer shorts seemed equally plausible. Where things started to feel a little forced was in the layering of lingerie over ribbed white bodysuits — picture a nude bra-and-panty set over the visual equivalent of a tank top.

These attempts at edgy styling detracted from some of the core ideas in the collection, which featured new variations on the innerwear-as-outerwear trend in the shape of silky shirts with prints of exotic animals and chic black slipdresses with delicate lace panels at the back or sides.