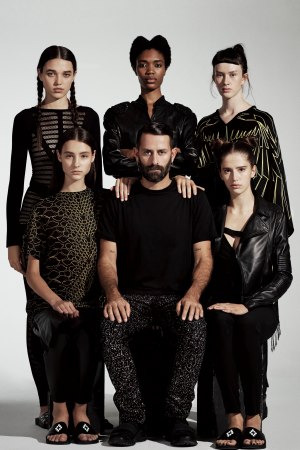 “I’m not a fashion designer — I’m a creative director,” Marcelo Burlon said at the presentation for his spring County of Milan collection, which took the shape of a dance performance and doubled as the world premiere of “Gualicho,” his new single with DJ Davide Squillace. “I like to bring content to the fashion world,” continued Burlon, who gathered a group of dancers, including performers from the Lido cabaret in Paris, around choreographer Kirikoo Des.

The avant-garde display at the cavernous Teatro Arsenale summed up the clannish vibe of Burlon’s elevated streetwear aesthetic. This season, his tribal references ran from the familiar — symbolism borrowed from the indigenous tribes of his native Argentina — to African-influenced beading and motifs.

The dancers mostly wore printed bodysuits that created a graphic second skin, but the look book offered a wealth of dressier options, from layered looks in monochromatic motifs to perforated leather pieces, such as a black bomber jacket with jet bead epaulettes.

“It’s about being smart in the market, bringing something that the audience needs,” said Burlon, referring to the label’s rapid evolution from a unisex T-shirt line to an upscale women’s ready-to-wear brand. “We’re growing up so fast that we’re always listening to the buyers.”

This carefully calibrated lineup should win him plenty of new fans.