Jeremy Scott made his Moschino runway a work zone — full of detours, obstacles and hazards — and then let the fashion construction jokes fly. 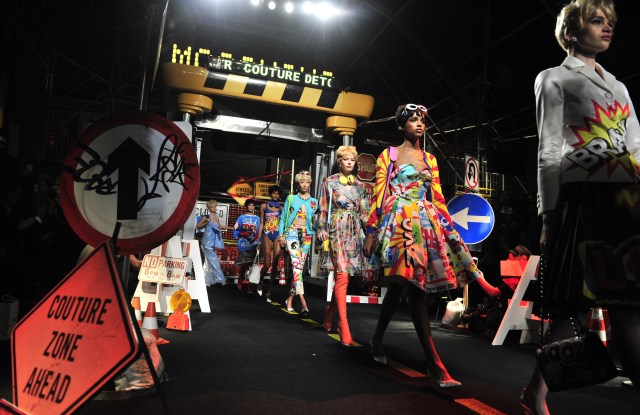 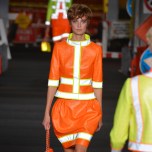 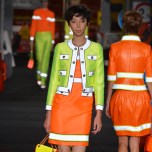 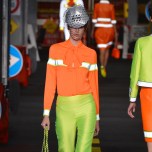 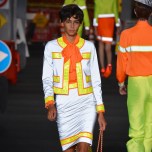 Entering a fashion show — especially one with a cult following, held at 8 p.m., which positions it as party time, in a pitch-black tent — is a hazard. There are traffic jams, detours, reserved parking (“you’re in my seat”), roadwork on the runway and general obstacles in every direction. In the interest of the quick-burn irony that now defines Moschino under Jeremy Scott, he made the veritable construction zone of the runway into a literal set, strewing it with an orange-and-white mess of traffic cones, barriers and signs warning of “Dangerous Couture Ahead.” So many people tripped over the heavy-duty cable protectors on the floor on the way to their seats, it was difficult to tell if it was part of the set or a legitimate safety measure.

The ruse allowed Scott to double down on the punchlines, playing on the notion of roadwork and construction, as in traditional couture garment-making. There were classic suits fashioned from what looked like safety reflectors in blazing orange and yellow; hats and bags that were essentially wearable traffic cones; hard hats, toolbox bags; over-the-knee boots inspired by traffic cones; and all manner of road signs made into wearable jokes: “Slippery When Wet” read one T-shirt dress, while a swimsuit was emblazoned with a red, circle-and-slash swimsuit prohibited sign on it. A bunch of looks reflected the grand silhouettes of Fifties and Sixties couture with full skirts, an opera jacket, etc. The clothes were garish as a highway pile up, just the way Scott and his devotees, well-represented in the crowd, like them.

Scott’s runway discourages deep thoughts. But just as one began to wonder if the jokes were wearing thin, three faux car washes, complete with fluffy rotating brushes and bubble machines, fired up on the runway, through which processed the first finale look: a jacket and skirt bearing the words “Brand,” “New” and “Look” — emphasis on “brand,” a term that defines a lot about the state of affairs at Moschino and fashion at large. Lest things get too deep, what followed was a rainbow of the dress equivalents of feather dusters and fringed carwash brushes. The sight of girls dressed to buff a car scrubbed any reflective inclinations right out of your head.