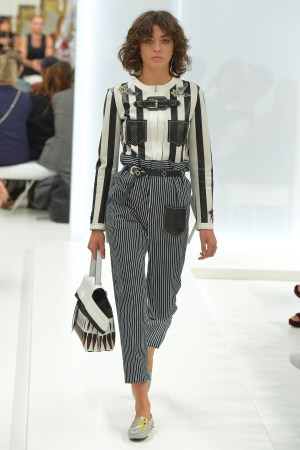 Alessandra Facchinetti formed her own girl band for Tod’s spring runway show. Stylized guitars were the obvious music reference, sometimes appearing as details and even full-on as bags in the shape of the instrument. Vinyl records in different sizes made a cameo, too, peppering a fluid jumpsuit with a peplum detail, for example. The designer tempered this theme, which at times skewed a little gimmicky, with feminine lasered-floral inlays running down shirts or decorating the brand’s classic Gommino moccasins.

She also put Tod’s leather expertise to the test, showing intricately decorated and perforated skirts cinched high at the waist — one of her favored silhouettes — as well as asymmetric, billowy shirts. Striped fabrics were another key to the lineup, bringing home the message that Facchinetti, in her fifth season at the Italian house, is growing more secure in leaving her mark on the storied brand. It’s a mark that feels personal — given her father’s leading role in one of Italy’s top musical groups. The Tod’s customer expects luxury and top-quality Italian craftsmanship from the brand and she won’t be disappointed by this collection in that sense, but a dollop of restraint in the embellishments and range would go a long way.