A sense of grace permeated the pretty and cohesive lineup, which perfectly expressed Wang’s vision of contemporary femininity. 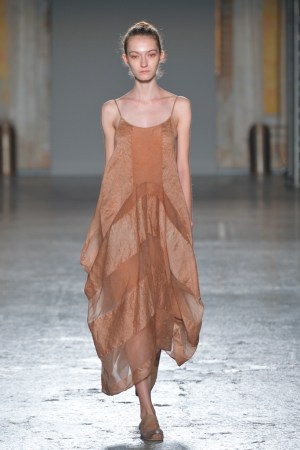 The young ballerinas stretching in the venue before the show announced Uma Wang’s inspiration for spring.

But don’t expect tutus and legwarmers. The Chinese designer didn’t take the theme too literally and re-interpreted it through her sophisticated lens. Ballet movements inspired the fluidity she injected into her chic pieces, including slipdresses worn under lightweight coats as well as egg-shaped styles embellished with soft draping. An array of vests and dresses cut in simple silhouettes revealed hyper-feminine pleated inserts on the back, adding an extra sense of dynamism. In keeping with the collection’s theme, a bodysuit was matched with a sarong-inspired silk skirt in a striped pattern, while graphic flowers were printed on the paperlike fabric used for a pleated maxiskirt paired with a silk satin tank top.

A sense of grace permeated the pretty and cohesive lineup, which perfectly expressed Wang’s personal vision of contemporary femininity.