A Détacher's Mona Kowalska riffed on the poof sleeve on printed looks with a vintage vibe. 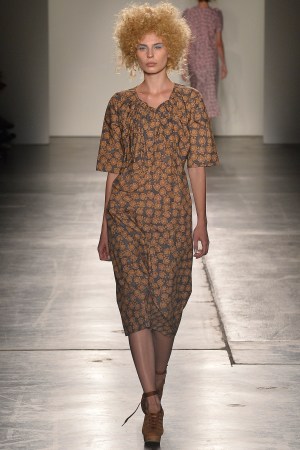 Mona Kowalska of A Détacher epitomizes the indie downtown designer vibe with her NoLIta-pioneer back story, arty fan club and deep-thinker fashion base. Her latest collection was built on almost a singular theme: oversize pleated poofs that became voluminous sleeves in short and three-quarter lengths or bodice treatments — primarily on printed shift dresses in below-the-knee lengths. The prints, which Kowalska said backstage were inspired by “construction, stillness and spaces” that came to mind when she was renovating her store, had a distinct vintage feel. Despite the other incarnations of the poofs on tops, sleeveless rompers and jumpsuits in different prints, the look began to get repetitive.

Knit dressing was a huge component as well, although it looked heavy for the season at times — a matching intarsia-style oversize turtleneck and sweater pant, for instance. The designer also showed a “popcorn”  knit which looked fresh in bubblegum pink paired with a pleated mélange knit skirt. Two swimwear looks, a hot pink maillot and brown high-waisted bikini, both with braiding details, were a nice surprise, while heavier crinkled gauze and denim styles would only appeal to those willing to forgo a flattering look in the name of art.