Within the elegant sweep of The Frick courtyard, Carolina Herrera showed a beautiful collection based on pink and pleats. 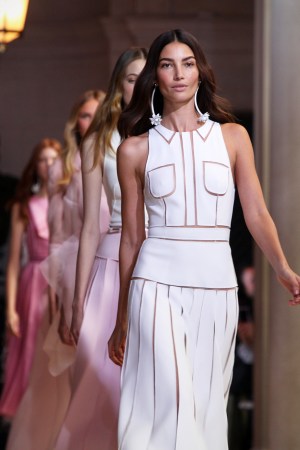 The Frick or a grim outpost (albeit it a newly branded one) on West 33rd Street with hideous, construction-obstructed access? Not a tough call.

We get it: Dumps are cool; city grit is cool. But beautiful, genteel settings have that [ital.] je ne sais quoi [ital.]. No, wait; we do [ital.] sais quoi [ital.] – beauty and gentility. And midway through New York on Monday morning, those characteristics looked pretty inviting. So, too, did Carolina Herrera’s collection, shown against the Beaux-Arts grandeur of the Frick’s covered courtyard. Focused on pink and pleats, it was a controlled dream of a show. “This is my rose period,” Herrera said during a preview. “Fashion should be optimistic.”

Her other big theme: transparency. But, as the Voltaire bon mot on Herrera’s mood board announced, “the secret of being boring is to say everything.” She thus handled the peekaboo with discretion – an approach that yielded more than modesty. Herrera used thin, sheer strips of fabric as welting between pieces of fabric, including trompe l’oeil pleats. This created gridlike surface interest that informed the clothes with a modernist attitude, particularly when worked in techno mesh and Neoprene, now among her favorite fabrics, even for evening.

Within its hyper focus, this collection offered plenty of range. Dresses came as sheath, trapeze, shirtdress; evening, in two-piece ballgowns and a pleated white beauty with an overall top. As for all the pink, by keeping the decorative elements to the inherent structural geometry (save for the occasional feather and flower-appliqué sighting) it never over-blossomed into cloying sweetness. Rather, it played as sophisticated, optimistic chic.