Danielle Sherman married references from the Kuba tribe in Africa and Thirties fashion for her Edun spring collection. 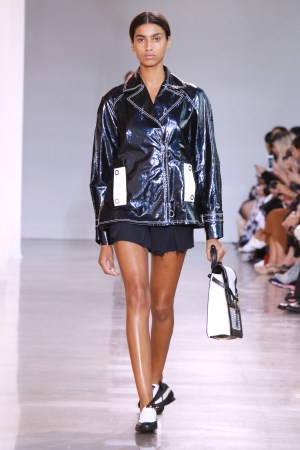 Danielle Sherman has elevated Edun into a consistently well-rounded and highly referenced collection. Its refined global aesthetic and genuine artisanal sourcing translate well. On the flip side, at times some things seem familiar. Nevertheless, there was a freshness to spring — drummers worked their beat midaudience as the first look, a blue PVC coat with contrast stitching, came down the runway.

“Our main inspiration was the Kuba people of Africa. They’re celebrated for their textiles and their performances — that’s why I wanted to have the drummers, to celebrate that here today,” Sherman said backstage. The tribal influence was subtly expressed through natural fabrics and frequent use of fringe; a raw linen with a frayed hem was cut in an ample top and dress, while an oversize poncho with a fringed hem and extralong sleeves also came in a jumpsuit version.

Sherman cleverly wove in a Thirties approach to her silhouettes, which accounted for the lineup’s exaggerated volumes. But the more traditional cuts worked most effortlessly: A black fringed-hem halter dress and a black-and-white macramé and fringe number proved that marching to a familiar beat is often best.