In a touching event on September 11th, Riccardo Tisci delivered a lyrical masterpiece for Givenchy. 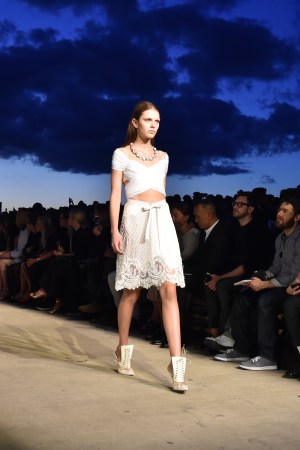 September 11th. Lower Manhattan. The mesmerizing twilight sky outlining the Freedom Tower. An exquisite delivery of the Ave Maria. The emotion all but overwhelmed.

Few fashion shows have been as highly anticipated as the one with which Riccardo Tisci marked his tenth year at Givenchy. The change of venue to New York, the date assigned him by the CFDA, the collaboration with Marina Abramovic and finally, the opening of the show to members of the public captured the conversational fancy long before the designer’s first model hit the runway. Success would require a deft balancing act, an event worthy of the high-hype Atlantic crossing yet somehow observant of the historical moment. Striking a masterful, almost impossible balance, Tisci delivered a glorious oxymoron of an event: a quiet spectacular.

The set on Pier 26 featured a series of makeshift protective enclosures constructed from rough, splintering wood and aged aluminum. On their roofs, performance artists emerged slowly from long-static poses, their everyday movements elevated by the consideration inevitable with slow motion: a woman got soaked under a faucet (“water to cleanse the spirit,” read the show notes; a couple embraced in a clearing of trees that “give support and life force”).

Tisci approached the show as a moment for reflection. He acknowledged the resonance of September 11th not by drawing inappropriate parallel to fashion, but by noting the importance of fashion as an expression of self and an outlet for emotion. His tenth-year milestone at Givenchy provided reason to look back at the essential elements of his powerful vernacular. At its core: the play of feminine against masculine. The show’s major themes were lingerie and tuxedo dressing, often worn in resplendent contrast, and always with lyrical grace. Tisci’s exquisite compilations of white laces and silks wrapped, tied and floated over fluid black trousers, some looks finished with languid robes and others, mannish tails. He incorporated sensual couture gowns with intense constructions and surprised with a significant showing of men’s wear. He also revisited last season’s facial decoration, now more exaggerated and ritualistic.

Tisci subscribes to the value of ritual; the religious references in his work are well-known. Here, he expanded on that subtext via the music. “I wanted to celebrate a moment of love of all religions. That’s why the music was from all different religions,” he said backstage.

The layered reflection proved powerful, a breathtaking argument for slowing down, like Abramovic’s performers, the better to find beauty in the things we have, the things we know.