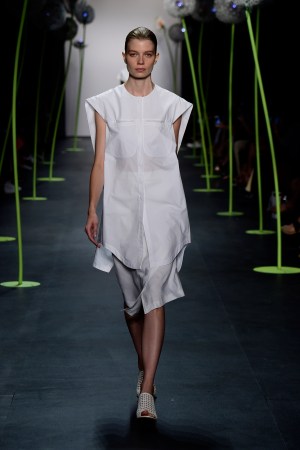 Lie Sangbong is an innovative Korean designer who has been showing in New York for several seasons under the label Lie Sangbong. For spring, he created a light and airy collection, playing with geometric patchwork on a group of all-white looks, most notably a beautifully constructed coat and an oversize shirt paired with cropped pants. Lie also offered a series in blue that incorporated graphic linear patterns, stained-glass motifs and Korean lettering that was the lyrics to one of his country’s popular songs.

The collection included relaxed and loose cropped trousers as well as skirts and dresses with origami folds. One of Lie’s most unique looks was a graphic-print dress with a printed sheer overlay that gave the illusion of a 3-D effect. Visually interesting and beautifully constructed, the lineup melded the simple with the complex in a unique and appealing way.