Norma Kamali looked back to her Seventies archives, anchoring her playful collection around the convertible "all-in-one" dress — but also offering a touch of androgynous cool. 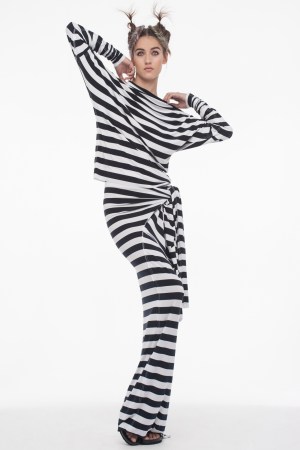 Norma Kamali looked back to her Seventies archives for spring, anchoring her playful collection around the convertible “all-in-one” dress she designed in 1973 that can be worn in multiple ways — as a skirt, a top and several variations of a dress. “It’s a vintage piece but done in more modern fabrics that perform better; you can throw it in the washing machine,” said Kamali, who brought the dress back in new graphic prints and colorways — as well as three different lengths. “But if you want to shorten it, you can also cut it with a scissor. It’s super clean and modern. The whole idea is: Do not own a piece of clothing that you need to dry clean.” Almost everything in her ever-practical collection was reversible, too.

Kamali also used her graphic prints — stripes, splotches, a punchy tropical pattern — on swimwear, leggings, crop tops and bonded jersey trenchcoats, occasionally mixing them all together in one look. The colorful clash delivered maximum impact; anyone wearing Kamali will not go unnoticed next spring. A black-and-white leopard-print trench with pale pink lining was unexpectedly feminine and, of course, her signature bodycon dresses and silver-studded bodysuits were designed to show off one’s figure. But her oversize jackets with cargo pockets, and other takes on men’s wear — such as pinstripe suiting with funky, exaggerated bell-bottoms, which she referred to as “fishtail pants” — stood out the most for their more subdued, androgynous cool.