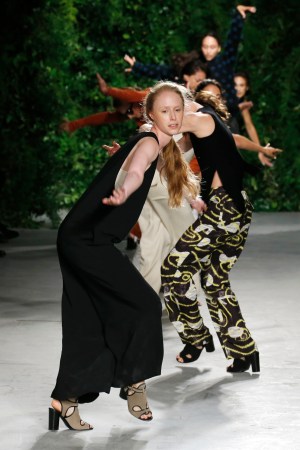 Carol Lim and Humberto Leon merged a confluence of themes for their eclectic spring collection: the idea of a “dream home,” the American architect Frank Lloyd Wright, travel, modern dance and ballet. Set in a live garden comprised of vegetables, trees and herbs — which will be repurposed and donated to Edible Schoolyard NYC, a nonprofit that develops gardens and kitchen classrooms in public schools — the runway show featured a surprise dance element choreographed by Justin Peck, during which a few models deliberately fell and then leapt up into dramatic dance. (Lim and Leon also collaborated with Peck on the New York City Ballet’s annual Fall Fashion Gala to be held on Sept. 30, for which they have designed costumes.)

Architectural silhouettes, such as sliced skirts or jumpsuits with plunging necklines inspired by Moorish arches, dominated the duo’s lineup in an organic, earthy palette. Drawing from the idea of travel, charmeuse minidresses and tunics were embroidered with Asian bonsai trees, and elsewhere, batik motifs riffed on African textiles. The collection’s highlight was a series of khaki looks, such as cotton twill cargo pants and a linen dress featuring an oversize brass button, all of which befit an exotic excursion away from home.