David Neville and Marcus Wainwright looked to a mix of athletic and military references in their spring collection for Rag &amp; Bone. 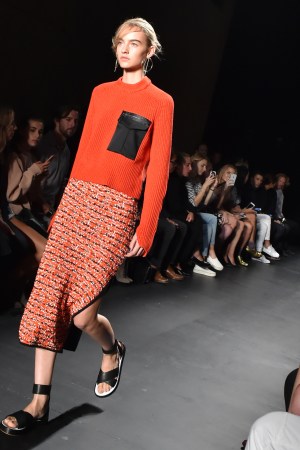 Slim and sleek silhouettes, as well as sport and military references, anchored Marcus Wainwright and David Neville’s spring collection — which managed to be at once sexy and tomboyish. “Those references are the real foundations of the Rag & Bone girl and how she dresses,” said Neville backstage. Showgoers who made the trek to St. Ann’s Warehouse in Brooklyn were treated to a custom soundtrack by Radiohead’s Thom Yorke and a live choral accompaniment from 12 members of the Brooklyn Youth Chorus, who were stationed throughout the show behind an eerie black curtain.

Army pullovers, jumpsuits and oversize parkas were the most obvious takes on the military trend, rendered in fabrics like nylon and cotton-linen-sateen blends. Silk bomber jackets — worn over leather skirts and cropped tops — had an athletic appeal, especially when styled with the duo’s new high-top trainers with colorful laces. Some looks also bore a likeness to Nineties-era Helmut Lang, with oversize cargo pants and all-white outfits, such as a field jacket worn over a silk charmeuse shirtdress.

Knitwear was particularly noteworthy. There were orange and yellow versions done in tweed cotton tape yarn that had a textural, sporty feel. Cotton bouclé ribbed dresses in contrasting colorways on the front and back fell loosely off the shoulder. And a series of long intarsia knit dresses — one standout version in a graphic black-and-white pattern — hugged the body with subtle cutouts for a street-smart sex appeal.