Ralph Lauren paid homage to the sailing life with a spring collection anchored in classic blue and white — with a few modern twists. 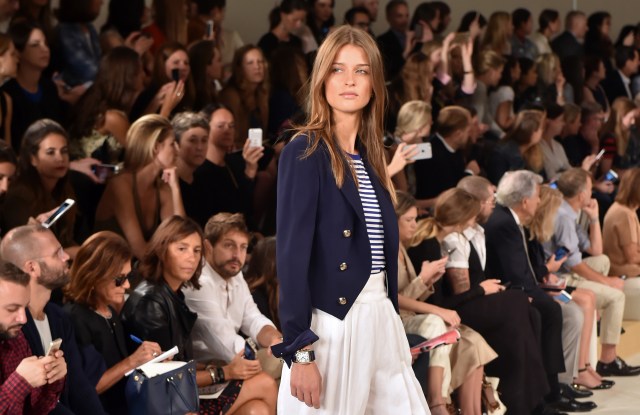 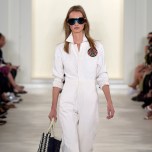 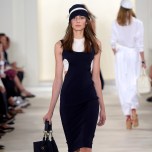 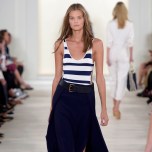 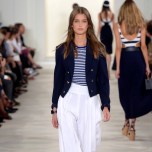 Ralph Lauren loves Paris. We didn’t need Frank Sinatra to remind us as the designer took his post-show bow; Lauren’s inroads into the City of Light are well-known. For the collection he showed on Thursday, Lauren paid homage to the sailing life, starting with the place where seafaring chic was invented, Deauville.

He took a straightforward approach with navy and white in flowy skirts, bodysuits, jackets and, for a little twist on the classics, wide, pleated pants with ankle-cinching cuffs. The separates played to the sporty chic Lauren loves while a pair of engineered knit dresses, one blue, one red, drifted toward another Franco influence — Alaïa. Lauren turned unexpectedly bold with a graphic, giant-scale sailboat print in flashy primary colors that looked especially interesting as a high-impact detail on one leg of a pair of fluid navy pants. It had an unexpected modern-art feel that continued with more abstraction in a white dress and pants, each with a large, single spill of red or blue.

This direction felt compelling and called out for greater development. Yet Lauren gave it only passing attention, instead refocusing on a group in pristine white and tan leather, usually a leather jacket over white underpinnings. It looked as it sounds: nice but safe. Not so, in the case of the intricately constructed evening gowns: in unexpected blue-and-white cotton shirting stripes, these took classic in a new direction, one of glam nautical appeal, especially worn as they were with a young, causal attitude. Yar, indeed.