To sir, with braids — and a housing snafu à la "The Wizard of Oz." Browne offered a lesson in exquisite tailoring and eerie schoolgirl attitude. 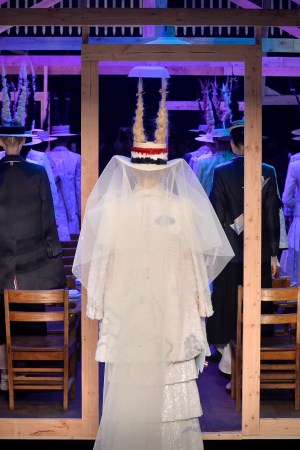 The pleated schoolgirl skirt – few fashion items are as loaded with subtext. The sartorial signal of conformist virtue, it makes the boys pant while letting the bad girls blend in with their virtuous counterparts.

At the Thom Browne School, the virtuous have been banned. This student body is an eerie lot, wearing thick braids that stand on end above straw boaters and devilish black-dot kewpie lips. Its comely bad seeds can bring the house down (literally) on the schoolmaster (perhaps they tired of looking at his ankles?) while working their own crazy take on multiculturalism – Eastern ornamentation meets Western tailoring; Japanese geta soles meet brogue and loafer uppers. They may terrorize their teachers, but stylistically, they’re A-plus.

Brown worships at the altar of order, renowned almost as much for his personal regimentation as for his men’s suits with short pants. Fold in the Catholic upbringing – what’s not to love about a pleated skirt? Here, he exploited a narrow idea into a collection that never got tired – a brilliant oxymoron of endless repetition and equal diversity. The ruse was the layered tailoring, mannish toppers and suit jackets over skirts of varying lengths and shirts with tails descending below the skirt hems. Individuality came in proportion – various cuts of jackets and skirt lengths – and in Browne’s exquisite fabrics with wildly decorative motifs taken from Asian art – gray pin-striped adorned with chrysanthemums, a pastorial scene on gingham; a geisha portrait on a pink and gray silk intarsia. He even threw in a fur or two because – why not? And without breaking character, his models got the word across that he’s serious about handbags, both smart and structured and more offbeat – big graphic fish.

In the end, with their teacher dead under the house and obviously bereft of parental instruction, these girls call their own shots. Is it any wonder one runs off to get married? She’s a vision in mesmerizing pastels – astrakhan and mink intarsia Chesterfield over a glistening sequined jacket and tiered skirt. Devilish perhaps, but also divine.