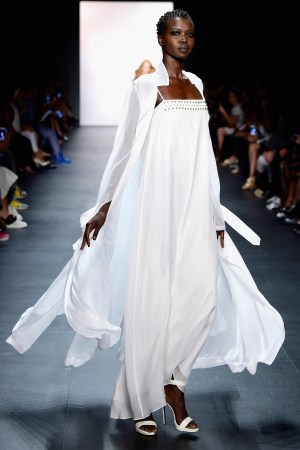 Under new creative direction, Thomas Wylde’s spring collection, presented during New York Fashion Week, was titled “Evolution.” Brand veteran Jene Park, who was recently appointed to head the design team after working at the Los Angeles-based company as the chief operating officer since 2006, wanted to push its rock ‘n’ roll-infused aesthetic in a more modern direction while still keeping true to its roots.

The Thomas Wylde woman has always wanted to look tough, rebellious and sexy, and this season, almost every look in Park’s collection came embellished — some more delicately than others — with silver crosses and chains. When draped over the lapel of a blazer, the charms doubled as jewelry. In her mostly black-and-white lineup, she explored the tension between ultrashort silhouettes — such as decorated HotPants and studded leather miniskirts — and more fluid, floor-skimming jackets and dresses in silk crepe and Georgette. There was an abstract mineral print on some pieces, which were also rendered with studs or Swarovski crystal detailing.

But sometimes, less is more. The pieces without heavy ornamentation — such as a laser-cut crop top and skirt set trimmed with suede, or a chic pair of black and white silk wrap blouses with contrast piping — proved the most modern of all.