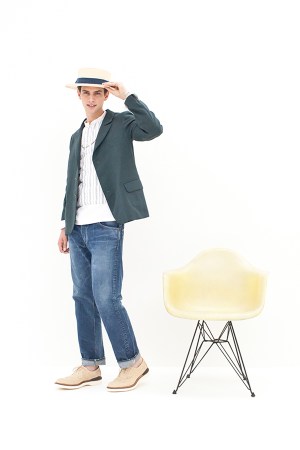 In its quest for the ultraconnected fashion customer, men’s and women’s wear label Visvim continued to build on its blend of Japanese and American heritage — this time referencing a Wild West theme.

In men’s wear, there were pieces that played off Americana motifs such as cowboys and horses, but Hiroki Nakamura’s offering included a Japanese-inspired trench with a hand-painted pattern based on seashells picked from the beaches of Montauk. The suit collection was created from vintage Japanese woolens from the Fifties, which were soft with a sheen in a slightly boxy silhouette.

Visvim shoes, a sought-after commodity, also took a front seat, with new raffia high-tops and chunky New Balance-inspired sneakers with a Native American headdress logo. For the first time, the brand also imported an artisan shoemaker who was creating styles at the presentation to highlight the footwear’s craftsmanship.

Nakamura’s women’s collection, WMV, which he designs with his wife Kelsi, was very much in sync with his men’s. He continued on his western path and the outcome was a kitschy-yet-cool lineup of sweet sundresses in prints created with rice glue and hand-painted, a technique the designer has mastered.

There were also plenty of his signature looks: one-of-a-kind vintage bandana-print tops, an indigo-dyed denim patchwork kimono, a suede fringe jacket and a traditional Taiwanese coat in a Pendleton blanket-inspired pattern. While the brand didn’t break any new ground, it remained true to its playful multicultural vibe: Japanese pop culture met the American West in the best way possible.