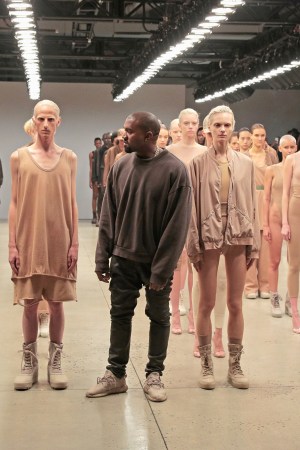 Yeezy Season 2 was a lot like Yeezy Season 1. As he did for his fall launch, Kanye West presented the second season of his men’s and women’s collaboration with Adidas through a performance conceptualized by Vanessa Beecroft. To a lesser scale, she’s the Marina Abramovic to his Riccardo Tisci, though the mock-military formation Beecroft came up with for West’s show couldn’t compete with the poignancy of Givenchy last week.

Yeezy’s models were deployed in small units, apparently grouped according to skin tone, which more or less matched the monochromatic assemblages of oversize hooded sweatshirts, dusters, baggy sweatpants and shorts in over-dyed, broken-in fabrics. Nude bodysuits, leggings and bras were many and the shoe of the season looked like the cool cousin of the classic Sorel Caribou boot. Progressing from light to dark, each group was called to march down the runway by a model playing the part of drill sergeant, which got a little hairy when a few of the troops didn’t seem to understand the order to “fall in.”

West did a good job with a diverse casting.
The staging contextualized the lineup as a stylish streetwear Army, directional and serious but also a bit silly. Clearly influenced by Japanese workwear, the silhouettes were strongly styled to halo the main look, which is just a sweatshirt. The lineup felt more relevant to men’s wear than women’s.

Tisci watched the proceedings from the front row, flanked by Lorde and North West, who was seated on her mother’s lap, giving a preview of the collection in her beige sweats. Just like last season, she grew restless as toddlers do and threw an adorable mini-tantrum that rivaled the runway for entertainment value. Even Anna Wintour seemed amused.

Resistance is futile. For now, West is a fact of fashion life. He’s not going away, and no one counting page views or sneaker sales can complain.