With a restrained collection of easy day looks, Zac Posen showed he has more to offer than just red-carpet glamour. 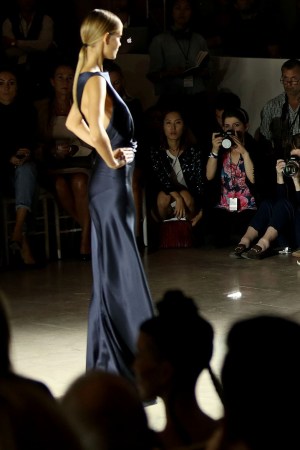 Zac is back. Just as his choice of venue — Vanderbilt Hall in Grand Central during rush hour — with a star-packed front row that included Amy Schumer, Bella Thorne, Jennifer Hudson and Christina Hendricks signaled a grand gesture, so did the direction of his spring collection. Backstage after the show, Posen said after establishing himself as a go-to label for red-carpet looks, he wanted to propose day options on the runway for his customers. He also addressed the transition in his show notes: “The idea is to blend couture techniques into the daywear and in turn, bring the daywear comfort into after-dark dressing.”

“I need a sense of ease, floaty-ness, softness and simplicity,” he told WWD, “but done with techniques such as cording, hinge-stitching, slits and then applying them to cottons and wool.”

Posen opened the show with a gathered-bodice sundress in black that featured one of the lacing techniques used throughout the lineup. It started under the chest and separated panels of a tiered full skirt. He also paired a fitted jacket with a full skirt in duchess silk, demonstrating ease can also mean polish. The looks alternated between day and night: a crisp white cotton shirt with an open, off-the-shoulder neckline that was chicly askew paired with a matching cotton dirndl skirt with embellished pockets; a voluminous black tank gown with a slit-staple treatment revealing a red lining, which also appeared in many of the looks.

A crisp cotton poplin “button-down gown” with an oversize pilgrim collar demonstrated the austerity and restraint Posen used in this collection. The palette, too, cast an almost monastic mood in mainly black, navy and white — save for a red duchesse silk strapless fit-and-flare party dress and a black-and-white swirl print draped-back day gown.

His concept was at its best in a gathered-and-laced navy cotton maxidress with cap sleeves and a navy silk apron dress with a full skirt — both for day — and a sculptural, but quite plain, oval corset top with an oval ball skirt. Ease and lightness also showed up in Posen’s various takes on the bias-cut slipdress (which is proving hugely popular in spring collections) and a navy stunner that closed the show and exuded Forties movie-star glam with a modern edge. It was just a little reminder of what Zac does best, in case all the day-tripping made you forget.