Alessandra Rich put a clever spin on eveningwear, bringing back the fun and exuberance of nouveau riche while making it look new. 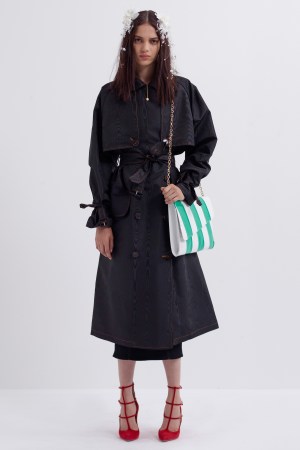 Alessandra Rich is up to something clever in eveningwear. The very word conjures a bygone era of formality and stuffy cocktail parties with passed hors d’oeuvres, but Rich’s approach brings back the fun and exuberance of nouveau riche while making it look new.

She named her spring collection “Dolores,” concocting a story about a young girl who runs away to marry a guy she just met. “I imagine her to be from Honduras, or I don’t know, South America, and she has these cheap plastic flowers in her hair and her trenchcoat on,” said Rich. “She’s ready.”

The trench came in black, white and fuschia silk Moiré — your grandmother’s favorite fancy fabric —  which Rich breathed life and wit into, using it on the sleeves of an embroidered denim jacket and an improbably chic jumpsuit suit. “It looks like someone working at a petrol station,” she said.

Putting a playfully stylish spin on stuff that has major tacky potential is Rich’s knack. Her signature dress silhouette — tight, tea-length with a godet skirt — came off the shoulder with a V-neck trimmed in a big ruffle, and off the shoulder with big pouf sleeves. It was treated in lace, paillettes, taffeta and even denim. There was a great denim coatdress version with traditional workwear stitching as well.

Dolores even had her wedding ensemble picked out: a taffeta dress and denim jacket accessorized with a gold heart-shaped belt and plastic flowers. Rich’s bride is a bit mail-order, but she had the charm, wile and style to make her a keeper.