Azzedine Alaïa truly operates on his own fashion calendar, commencing showroom presentations of his spring-summer 2016 two days after Paris Fashion Week had drawn to a close. 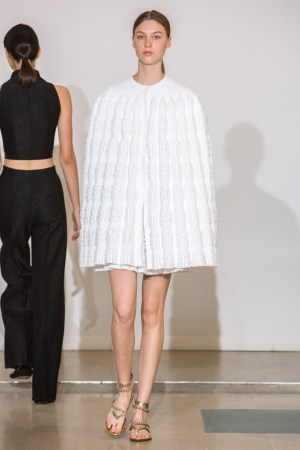 Azzedine Alaïa truly operates on his own fashion calendar, commencing showroom presentations of his spring-summer 2016 two days after Paris Fashion Week had drawn to a close. He even toyed with the timing of his first appointment — for 2 p.m. on Friday, Oct. 9 — advising journalists via email 15 minutes before the show that it had been delayed to 3 p.m., only to promptly change his mind and urge them to hurry up and arrive for an on-time start. Phew!

The reward was a strong and diverse collection, exalting his technical wizardry with knitwear and surprising with an element rarely seen in past collections: Pants.

They were here as stunning as his dresses and also made of knit, mostly black shot with Lurex or in a creamy pique jersey with a flared shape and high waist. Often paired with little blouson tops, the pants gave the models a slightly Seventies allure. The decade came to mind also with long, lean dress fitted at the bust, the sleeves ballooning at the cuff. Dense and tiny frills were applied to his knit short skater dresses with voluminous caplet effect. There was also a hint of Sixties in the optical black and white motifs on dresses and skirts in A-line shapes, short or floor-length.

The designer also surprisingly worked with delicate lace, creating slightly Elizabethan sleeves on black tulle tops and shirtdresses. But there were also the designer’s core classics: White shirts and tailoring in black leather, sparked with military details and micro metallic studs. They were also a couple of classically draped white dresses with gold metallic details.
While the collection lacked a common thread, referencing multiple periods across centuries, the clothes were beautiful and executed with precision — unlike the timing of the show.