Karl Lagerfeld took a flight of fancy for spring, installing a state-of-the-art Chanel Airlines terminal under the dome of the Grand Palais — and showing a bold collection for ladies on the go. 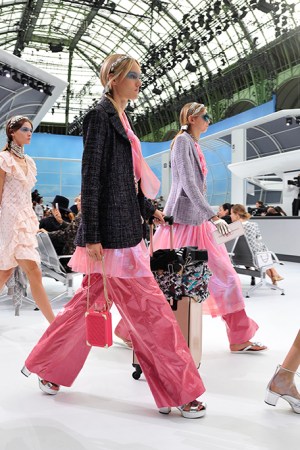 Oh, that Karl Lagerfeld. We think of him as fashion’s ultimate realist, devoted unfailingly to the creation of exquisite, pragmatic clothes, every last piece intended for a lofty end-use — to be worn by chic women who pay for their clothes. “I don’t make art. I make dresses,” he loves to say.

Turns out, Karl’s quite the fantasist — he can dream up a world in which air travel is glamorous. No cheesy pizza stands. No grime-infested seating. No tacky jogging-suit sightings. No wailing children (but a perfectly behaved little blond boy — mais oui!). That’s what he did for his Chanel show on Tuesday, installing a pristine, state-of-the-art Chanel Airlines terminal under the dome of the Grand Palais. The departures board heralded flights to the cities of Chanel events – Shanghai, Dubai, Salzburg, New York, the upcoming London and Rome. Ground service attendants were all beautiful and impeccably turned out.

It made for one big, madcap fantasy — but for the clothes, which were very real, and fabulously so. In fact, Lagerfeld took something from the reality of today’s populist air travel: diversity. (Or he took it from what people told him of such excursions; he doesn’t board private jets through the Sky Priority lane.) Models came rapidly from all directions, in a range of clothes that even on his prolific scale was vast. Tweeds weren’t really tweeds but embroideries on suits that, with nary a braid or button in sight, looked unmistakably Chanel. But then, “no braid trim” didn’t mean no trim at all. Lagerfeld had his traditional braiding photographed, and the photos laminated to silicon, which he used as edging on skirts to smart, modernist effect.

Many of the suits came in bold renditions of ode-to-Air-France red, white and blue. The key ideas: long and lean, long with a full, release-pleated skirt, and a lavender beauty with giant lapels and black bow closure that would have a lady on cloud nine before the plane took off. There were flashy prints, often in voluminous skirt-over-pants pairings, and sleek, ladified coats worn with matching bags and Coco boaters. Girls who fly casual might go for cheeky airplane-patterned sweats or camellia-printed jeans, while ladies flying in and out of somewhere for a cocktail fete, a selection of glittering beauties in silver and black. (“Silver is so much better than gold on the plane,” Lagerfeld advised during a preview.)

As for the accessories, sporty sandals with embedded LED bulbs provided personal floor lights. And would Chanel Air not consider the luggage? No standard-issue black aluminum here, but divinely demonstrative two-and-three-piece wheelies. Carry-on only, ladies, lest those precious bags go missing.