Alber Elbaz went "like" minded for spring, delivered a sartorial mix of looks — all intended to look good on the runway as well as on a smartphone screen. 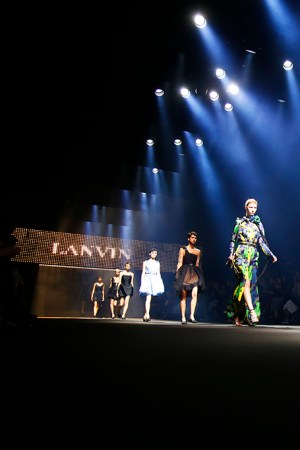 The Lanvin collection Alber Elbaz showed on Thursday night was a sartorial “smorgasbord” — his word. But not one thrown together frantically by an ill-prepared host. Rather, he sent out a carefully considered lineup intended to address the multiple requirements of fashion today. “We used to be designers. Now, we’re image-makers,” Elbaz said during a preview. Inherent in that role: delivering clothes that look good not only on the body and in the mirror, but also on the phone, in search of “likes.” He wondered about the role of fashion as entertainment — “not complaining, just questioning” — adding, “I have to show the extremes.”

And so he did, in a lineup comprehensive to the point of discordance, and often very beautiful. Elbaz organized his nearly 70 looks into groups — black and white, color, “body dresses” — with a logic not always clear from the audience perspective. With his first look he delivered a purposeful, almost tough rendering of a classic: white shirt, black pants. Other exits expanded on and toyed with that austere tailoring, sometimes in concert with ballooned organza or a sleek satin mini over sleek pants. Elbaz went undone with tweeds that had seemingly fraying edges — a faux effect; real raw edges don’t hold up to wear, he cautioned.

He moved into color with red-carpet-inspired goddess gowns for the imperfect among us — they looked revealing but were actually built on highly constructed foundations; and he went fanciful with allover embroideries of vibrant sparkles, one dressed down under an anorak. Stunners here: pale and bright pink under a mannish, boxy vest and a Twenties-something top and skirt in mismatched reds. Decoration came in diamanté clasps and big, ribbon bows placed with disregard for symmetry, for example, haphazardly fastening a dream of a mini coatdress in dusty blue sequins. Silhouettes were as varied as a pristine, fluid white chemise and a wondrously complicated lace dress that was half flat and half tightly packed pleats.

In exploring his extremes, Elbaz covered ground both practical and heady. Wanting to showcase the personal side of the fashion process, he left white dressmaker basting to stand in contrast against black jackets and dresses. He also heeded another extreme — that of hard, cold commerce, musing that after the creativity, the buzz, the provocation, “then what? Sell a bag.” Two-tone leather bags were chic; those decorated with childlike scribbles, more whimsical. And lest anyone miss the point, Elbaz pushed it to the nth degree, splashing garish prints of shoes, bags and “Lanvin Faubourge St. Honore” across dresses and coats. “Do I have the bags?” he questioned, rhetorically. “I have the bags.”