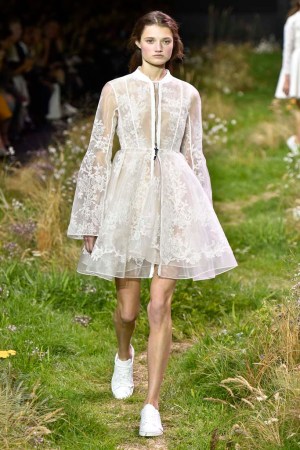 Giambattista Valli surely must have exorcised himself of his obsession with baby-doll dresses this season, having shown oodles of them at Giamba in Milan, his signature label in Paris, and now chez Moncler Gamme Rouge, too.

They were exceptionally pretty here in frothy white fabrics: guipure, organza, tulle and technical mesh embroidered with 3-D daisies or lily of the valley, or flecked with rococo appliqués. He borrowed the color and diagonal closures from fencing, the theme teased during the show and then thrust upon the crowd via the finale, when dozens of foil-wielding sportsman strolled out and flanked a runway of grasses and field flowers.

But this was a romantic and — but for a few drawstrings, a bit of PVC, some sweatshirt gray and a lot of white sneakers — hardly sporty collection, all short fit-and-flare coats and dresses with empire waistlines and an occasional pannier expanse to the skirts, a wink to the 17th century, which spawned such famous swordswomen as Julie d’Aubigny, mentioned in the show notes.

(Incidentally, a quick Google search reveals that d’Aubigny largely preferred male clothing and probably wouldn’t have been caught dead in a baby doll.)