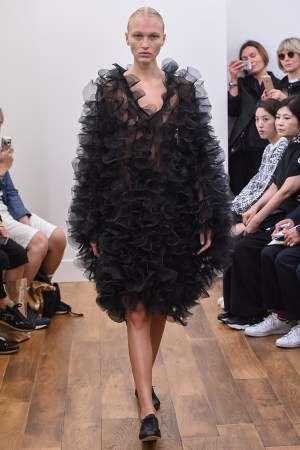 With outfits rendered solely in a palette of black, the Noir Kei Ninomiya label puts the focus on innovative constructions. Designer Kei Ninomiya, a protégé of Comme des Garçon’s Rei Kawakubo, has been experimenting with techniques that don’t require sewing, and his spring collection featured three-dimensional garments held together with tiny black studs, silver ball chains or macramé knots.

The sheer range of his inventiveness was breathtaking. In a silence interrupted only by the clatter of camera shutters, models wore creations such as a dress consisting of tiny rectangles of fabric pieced together with studs and a coat crafted from knotted strips of tulle that were left trailing loosely from the waist.

A jacket of 3-D fabric rosettes brought to mind the fractal geometric patterns found in nature, while dresses assembled from long strips of fabric threaded together with silver chains produced shimmering effects reminiscent of kinetic art.

Ninomiya said some garments take a single worker four to five days to complete, but he insisted the techniques used were fairly straightforward. “They are very special pieces, but everyone can make them,” he noted. That may be the case, but some things simply should not be attempted at home.